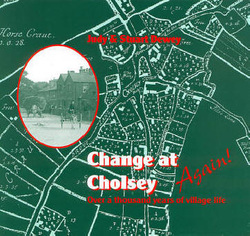 
This is a completely revised and very much expanded version of the original Change at Cholsey, published to celebrate the village's millennium in 1986 (hence the "Again" in the subtitle!).

From a tiny Saxon farming community to today's lively commuter village, this is a vivid picture of Cholsey in South Oxfordshire and the lives of its people. The latest historical research is spiced with characters and anecdotes, bringing the past to life in a very readable and lavishly illustrated book.

In addition to the main chapters, which tell the story of the village from the Stone Age to the beginning of the third millennium in a largely chronological order, there are special features on:

Researched by the Cholsey History Group, the book was written and produced by Judy & Stuart Dewey, local historians and publishers who have lived in Cholsey for over thirty years.

Published on behalf of Cholsey 1000 Plus.