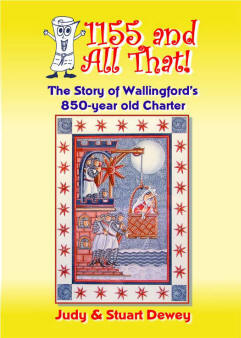 
This is a brief and readable account of the story behind Wallingford's remarkable Charter, given in 1155 by a grateful Henry II in return for the support given to him by the town during the recent civil war between his mother Empress Matilda and King Stephen. As well as why the Charter was granted and the events leading up to it, the book explains who was involved, and what effect it had on the people of Wallingford at the time and over the succeeding centuries.

Fully illustrated, including two splendid medieval manuscript illustrations in full colour, it also features a colour-coded guide to the exact words of the Charter in a new translation by Wallingford resident Dr KSB Keats-Rohan.

This book embodies the very latest research on the early history of the Borough.

The authors, Judy & Stuart Dewey have been involved in writing and publishing local history for over thirty years and were instrumental in founding The Wallingford Historical & Archaeological Society (TWHAS) and Wallingford Museum.