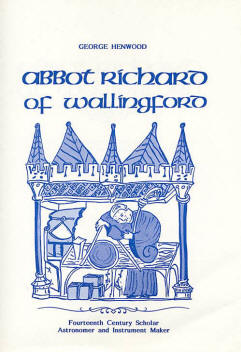 
This is the story of a remarkable 14th century monk of humble birth - he was the son of a Wallingford blacksmith - who became Abbot of St Albans and was admired by nobility as a scholar and inventor.  Orphaned when he was 11, Richard became a novice at the Benedictine Priory of Holy Trinity in Wallingford and attended Oxford University where he studied (in addition to theology) geometry, mathematics and astrology. At the age of 23 he entered the Abbey of St Albans but spent a further nine years at Oxford. His many writings include work on mathematics and astronomy and he designed several instruments for astronomical observations and measurements, culminating in his astrologe or 'Great Clock'. Effectively, this was a mechanical computer. He was elected Abbot of St Albans in 1327, a post he continued to hold despite the onset of leprosy. He died in 1336, aged about 46.

(Published on behalf of Wallingford Museum)

NB: Stocks of this book are getting very low!
Pie Powder Press - Publishing Local History in South Oxfordshire since the 1970's