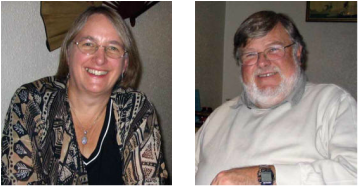 We started Pie Powder Press in 1985 because we couldn't find anybody willing to publish a book we'd written called PoW Sketchbook - A Story of Survival. It was based on the diary of a friend of ours whose superb drawings, all undertaken at considerable personal risk while he was a prisoner-of-war of the Japanese, were featured in an exhibition we mounted at Wallingford Museum. (Click here for more information about the book.)
The next year, we wrote and published a history of our village, Cholsey in Oxfordshire, which that year celebrated its millennium. Pie Powder Press was on its way!

We met at Durham University where we both gained BAs, Judy in History, Stuart in English.

For many years, until our children Becky and David were born, Judy was Head of History at Didcot Girls' School. Later she was Chair of Governors of Wallingford School for 10 years - and today she teaches adult education classes for Oxford University and the WEA, as well as giving talks and guided walks on local history.

From Durham Stuart joined the BBC as a Studio Manager in 'steam radio', and moved to television in 1974. There he enjoyed many years in Presentation department, ending up as Deputy Promotions Editor. Then he moved to Programme Planning and scheduled BBC-1. Later he became responsible for Special Projects such as the Olympics, General Elections, royal obituaries and - slightly to his surprise - developing major computer software. He retired in 2000 after 31 years' service.

Together we helped start The Wallingford Historical & Archaeological Society (TWHAS) in 1974, and Wallingford Museum in 1981. All those years later we are still active members of the Committee which runs both organisations! (Stuart is President of TWHAS and Managing Director of the Museum and Judy is the Museum Curator). Click here for information about the Museum and TWHAS.

We also helped to found a community association in Cholsey called Cholsey 1000 Plus after the highly successful year of celebrations for the village's millennium in 1986. Amongst other activities, we jointly edit and produce The Forty, an 80-page magazine distributed free to every household three times a year.

In July 2012 the partnership was rocked by the loss of Stuart who passed away at the early age of 65 following a long fight with a variety of medical problems.

Since this tragic loss, Piepowder Press has continued to function (albeit in a limited capacity). The Partnership now officially belongs to Judy and Becky. Being a web and graphic designer, David stepped in to help finish Tony Rayner's book 'Winterbrook & Cholsey's East End' (a project Stuart was half way through completing when he passed). The book was published in 2013.
Pie Powder Press - Publishing Local History in South Oxfordshire since the 1970's