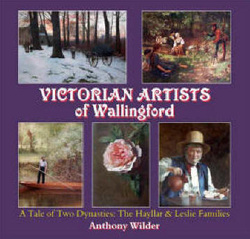 over 70 reproductions, 50 in full colour


In the late 19th century, Wallingford was home to two famous artistic dynasties – the Hayllars and the Leslies – and to Claude Rowbotham, who was a member of another notable artistic family. The book tells and illustrates their stories.

James Hayllar and his family (of whom four daughters became well-known painters, exhibiting at the Royal Academy at an early age) lived in Castle Priory. Nearby at Riverside lived George Dunlop Leslie RA and his family, of whom two sons were talented painters. In the cottage between (now Cromwell Lodge) was George’s sister Mary, another accomplished artist and renting Riverview (near Wallingford Bridge) was their friend and fellow artist, Claude Rowbotham.

Illustrated with over 70 reproductions, 50 in colour, the new book examines the very diverse work of these extraordinarily talented artists; their personal and family lives; the influences they had on each other; and their local and national importance. In the light of Hayllar’s four daughters, it also looks at the special difficulties confronting women painters in the Victorian era.

The author, Anthony Wilder, is a professional artist and teacher. He’s the son of Will & Joan Wilder, whose work as painters is well-known in Wallingford, so in researching the book Anthony felt a strong affinity with artistic dynasties!

Published on behalf of the author.